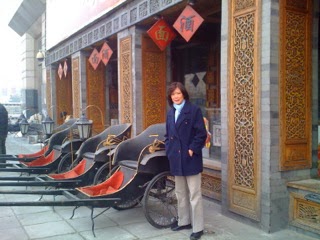 Hi, Everyone,
I’m taking you back three years to when I was working with athletes in Beijing during Chinese New Year.
Beijing is “alive” with the sounds of fireworks everywhere. I don’t think I’m going to get much sleep tonight – it’s really loud. The girls at the National Training Center told me that the Chinese government only allows fireworks during the Chinese New Year celebrations. Being the last day, it seems everyone is out in the streets setting off fireworks.

I played badminton with the National staff and it was really fun. They were really excited to see me play and in their enthusiasm insisted that I warm-up with one of their young male players. He’s on the 2nd tier of the National team – only 18 years old. I tried to tell them it was YEARS since I played and I shouldn’t be hitting with that young guy. However, I surprised myself that my form and strokes were still there and that I was able to keep up with him – just my timing and power of my strokes were lacking. My right shoulder doesn’t have full range of motion any more, which makes it difficult for overhead lobs and smashes.

A short time later the National women’s team (1st tier) arrived to train at the center. What a treat to watch them again, as it reminded me of all the drills that I had to do during my training. I was particularly impressed with the youngest member of the team, age 18, who I think is going to win many future championships. Her strokes were crisp and her movement patterns were almost perfect.

On this trip I’ve seen mostly swimmers, badminton and table tennis players. Last trip I worked with gymnasts, track & field athletes and divers. I also have been giving lectures and hands-on practice to the National staff. They have been receptive, although it’s tough for most of them to grasp all the concepts as they are not physios by training. I’ve tried to keep it basic so that they don’t get too confused.

Everyone here has been very gracious. Beijing today is definitely different from the Beijing that I knew in 1989. It’s much more service oriented and people actually smile now, not then. I guess that’s what capitalism can do to a country.

Looking forward to getting home.

Posted by Emilie Pallos Graphic Design at 4:51 PM No comments: 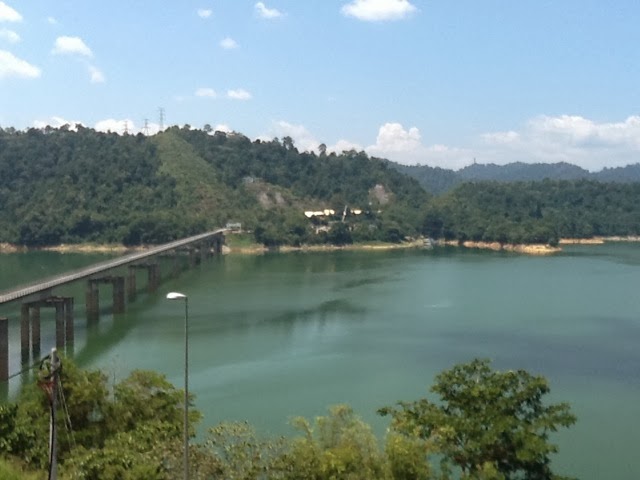 Taking you back to 2012 when I visited my native Malaysia and former badminton coaches in my hometown of Ipoh.
Greetings from Malaysia…
Weather here is hot and humid – I really don’t like being hot and sweaty all the time and wonder if I will ever get used to it. This is a view from our room. The lake used to be a valley and about 30-40 years ago a dam was built and the entire valley was filled with water. I was told that it’s about 400 feet deep and there are parts of the lake where the tops of trees are still showing. My brother who came here to visit years ago said that before the highways were built, there were elephants, buffalos and other wildlife swimming in the lake, plus lots of monkeys. Alas, with tourism they have been driven deeper in the forest. The mountainous areas are the protected Belum rainforest, which is older than the Amazon. This lake is about two hours’ drive from Ipoh, my hometown.

My time helping out at the local university hospital in Kuala Lumpur went well and was made more fun with my team members Tracey and Kelly assisting me. I believe it was a good experience for both of them to work in a non-U.S. setting. The Physios here are very receptive and were very interactive.

My last few days visiting were spent in Ipoh. The highlight whenever I visit here is seeing my former badminton coaches who had a tremendous influence in my formative teen years. I credit one in particular as being instrumental in helping me analyze and dissect movement at such a young age, which is now my area of interest. Master Teik Swee is now in his mid-70s and was so happy when I told him how his careful coaching helped shape my career. I was already a state champion when he started to coach me, but he felt that my footwork and strokes would not carry me to the national level. So he rebuilt my foundation and changed my footwork and strokes, an arduous and painful process for me.

After about six months of “re-programming” and refining of my movement skills, I became the national junior champion, and later on to the national team for the World games. My strokes and footwork were changed completely with increased speed and power. That’s why I believe that "re-programming" is possible with the right and precise guidance, and with lots of focused practice.
Take care,

Posted by Emilie Pallos Graphic Design at 4:49 PM No comments: