The Value of Listening

I recently evaluated a NCAA Division II university football wide receiver who is 5-months status-post ACL repair.  He still had knee pain and felt his progress had plateaued and believed that he would not be able to progress to full running or cutting /pivoting necessary for his position.  He was putting in the work daily under the guidance of his school’s rehab program, yet he wasn’t seeing continued progress.   Assuming I would be looking at more advanced athletic progression due to the "5 months post" status, I was prepared to assess just that. I also has some preconceptions and biases that I should check out the IT band, quad tendon, fat pad etc, hip strength, and ankle stability.
But first, I just listened.  Thanks to the mentoring of Clare Frank and Kathy Kumagai-Shimamura, of APU’s Movement System Fellowship program clinical faculty, I focused on the athlete’s replies in order to ask better questions. I also watched his facial expressions and body language. 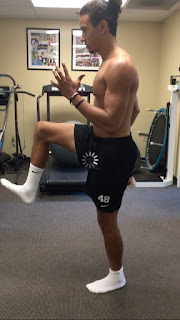 We talked about his progress to date. He was disappointed. (heard that).

He still had some pain near the graft site. He had some pain in other places. And even his other knee hurt at times. (heard that).
He couldn't put his finger on it but he just kept reflecting that his leg didn't feel connected. (heard that)
and that sometimes he would alter his gait when people approached him walking to class.  (heard that)

This was not good for a receiver needing to be prepped to be chased by blood thirsty tacklers.

I asked more about the way he got injured. He demonstrated the mechanism of injury.

I asked about his altering his gait with people walking toward him. Wouldn't you know... it was in the same stride & position of heel contact and loading as his mechanism of injury.

We talked more. I LISTENED. I questioned about "trusting" that leg, trusting his body. I inquired about minor high school injuries well healed by now.  Instead of logging that information in to this athlete’s "past medical history”, it became some of his current medical history.

Are we on “auto-pilot” as we as our subjective exam questions?  Do we ask reflective questions?  Do we actually “hear” and “listen” carefully to the emotion and belief system underlying a patient’s responses?  We know that most other health care providers don't. But do we?  Do we not have the time or do we not take the time?

Prior to meeting him, I assumed I would help this athlete solve "a little" pain in the knee. We’d then move on quickly to “athletic movement training". I went in to the training room that day, ready to dazzle him with "advanced" athletic progressions and performance training.  In my attempt to be prepared, the assumptions became a potential distraction from really “hearing" him.

BUT, ONCE I LISTENED, things changed.

We did simple walking / striding drills. We "went there" to mechanism of injury positions and engaged some muscles that were supposedly weak ... or, were they merely inhibited …on a subcortical level?  Manual muscle performance testing demonstrated weakness. However, facilitation and neuro re-ed revealed they were merely inhibited. The question is, why were they inhibited or what was inhibiting them? After facilitation and neuromuscular re-education, those same muscles were testing strong. We did other less dazzling exercise training which helped him “connect” and get the "buy in”.  I gave him 4 simple things to work on before I would see him again. None of these 4 things I gave him addressed the pain I thought I was there to cure, or the advanced mobility I was there to dazzle him with.

One week later, my son, who also plays on football team, told me that this wide receiver couldn't stop talking about how much better he was after that session. He felt more connected with his body. He said he was another 50% improved after feeling he had reached a plateau. (heard that)

What was the difference?  Mostly, I think I helped him connect his fears and belief system to how he protected his movement and helped him understand that over time, the protective strategies had become a habit leading to an impaired movement pattern. Through listening, patient education, and modulating input into his nervous system, he “found" his leg.  Pain lessened, but more importantly, inhibition reduced and strength was able to re-emerge.
Maybe when I see him next, we can get to that more advanced stuff I had planned.  I don't know.

Take home message:  I will listen first, then decide.

Dave Johnson is the president and owner of Evergreen Physical Therapy Specialists in Pasadena, Ca.  He is a physical therapist with over 30 years of experience, a Movement Links certified clinician, and a graduate of APU's Clinical Fellowship in Movement and Performance.

Posted by movementlinks at 8:42 AM No comments: